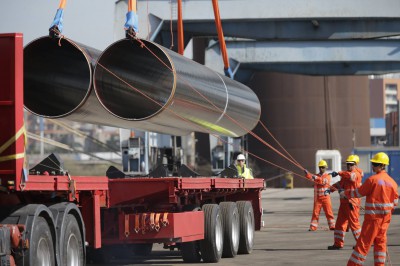 The three National Regulatory Authorities of Albania (ERE), Greece (RAE) and Italy (AEEGSI) have successfully concluded the certification of TAP AG as an independent transmission operator for TAP, the pipeline that will bring Azeri gas to Italy, through Greece and Albania.
The decision of the three Authorities is the result of the excellent partnership undertaken since the beginning of the exemption procedure. This model is an example of best practice in Europe and the certification of TAP AG represents a third additional step (following the approval of the Tariff Code and the Compliance Programme) towards the realization of an infrastructure that will increase competition and diversification of gas sources as well as security of energy supply in the European natural gas market.

Following the Europian Commission decision on TAP AG’ exemption of 16 May 2013, the Authorities with three separate acts (AEEGSI Deliberation 249/2013/R/GAS of the 6th of June 2013, RAE Decision n.269/2013 of the 12th of June 2013, ERE Decision n. 64/13 of the 13th of June 2013) adopted the Final Joint Opinion(FJO) on TAP AG’s request for exemption from third party access, regulated tariffs and ownership unbundling for 25 years, pursuant to article 36 of Directive 2009/73/EC (“Gas Directive”), subject to a number of conditions listed in Part 4 of the FJO. In particular, according to the provisions of Section 4.5.2 of the FJO TAP AG was granted an exemption from the provisions on ownership unbundling as set out in Article 9.1 of the Gas Directive, for a period of 25 years, subject to a set of conditions.

Among other conditions, an obligation was imposed on TAP AG to apply for certification on the basis of the independent transmission operator model in accordance with Article 10 or 11 of the Gas Directive, as the case may be, so as to ensure that the pipeline technical and commercial operations are carried out independently from TAP AG’s shareholders and to be fully certified as an independent transmission system operator before start of construction of the pipeline, which is at the latest scheduled to start on the 16th of May of 2016 [1].
To this end on 1 July 2015, the Authorities received an application by TAP AG for certification on the basis of Section 4.5.2 of the FJO. The application has been submitted by TAP AG on the basis of the provisions of an independent transmission operator model set out in Chapter IV of the Gas Directive with the exclusion of Article 22 of the Gas Directive.

Following the European Commission Opinion of 28.1.2016 and the Energy Community Secretariat Opinion of 3.2.2016 on the Authorities joint preliminary assessment on the certification of TAP AG according to the provisions of the FJO and the Gas Directive, the Authorities with three separate acts (AEEGSI Deliberation 172/2016/R/gas of the 7th of April 2016, RAE Decision n. 45/2016 of the 31st of March 2016, ERE Decision no. 36 of the 31st of March 2016) adopted the Energy Regulators’ Final Decision on the certification of TAP AG.

In essence, the Final Certification Decision and the conditions and obligations included therein for TAP AG, along with the strict regulatory regime applicable to TAP AG pursuant to the FJO, provide the necessary safeguards to ensure that TAP AG operates as an independent transmission operator.
[1] According to the Authorities’ Joint Opinion on TAP AG’s request for a prolongation of the validity period of the FJO, adopted by the Authorities in April 2015.